How to Use a Pilates Reformer for Beginners 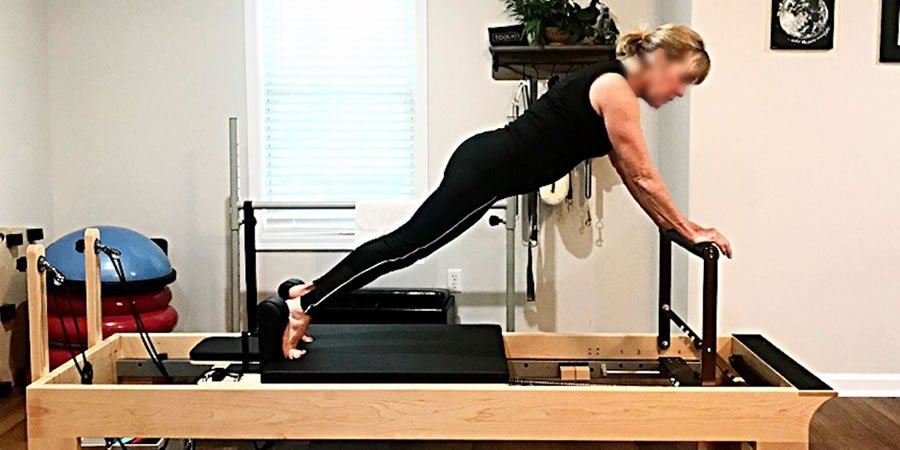 Whether you started on the mat and want to test out some apparatus work or you’ve heard buzz around studio Pilates reformer classes, hopping on the machine can be intimating and confusing at first. They are outfitted with straps, springs, and a sliding carriage, so if you’re not careful, you could actually hurt your body—or, at very least, your ego. But we promise this isn’t a cruel contraption. It’s a super-useful tool that can take your burn to heights you never knew existed.

To break down the reformer for beginners, we tapped Pilates instructor Elizabeth Heidari of Flex Studios in New York City to fill us in on everything a newbie needs to know before taking that first class.

Mechanics of the Pilates Reformer

The Pilates reformer consists of a flat, cushioned, moving carriage with shoulder blocks for comfort and stability, which you’ll definitely need during certain exercises. You’ll also find a back and front platform at either end of the machine. The front platform usually hides the springs (more on those below) and sometimes a moveable bar that facilitates other possible exercise variations. The back platform may also have two adjustable bars. There are two sets of resistance straps with handles—one at the back platform and another, longer set near the carriage.

“Stepping onto either platform and stepping down to the floor is going to be the easiest way off, even if you feel like you’re losing your balance,” says Heidari.

It’s this set of springs underneath the front platform that makes reformer Pilates what it is. Changing them makes the carriage and strap resistance lighter or heavier. The springs are typically color-coded to differentiate them, and you can have one or multiple springs attached at a time. It might seem like the lighter the resistance, the easier the exercise. But you’ll realize fairly quickly that when tension is low, you’ll have to recruit those core stabilizer muscles a lot more to maintain control, which is anything but easy. “Because Pilates is just as much about the balance of stability muscles versus muscles that are mobilizing, the springs come into play with that,” says Heidari. Using a lighter spring setting for a mobilizing exercise may feel too easy, but this lighter resistance will make a stability exercise incredibly difficult. Think of trying to hold a side plank when a gliding carriage is loose beneath you. Quivering limbs come to mind, right?

If you have any trouble changing springs or if you feel unstable with the current settings, just flag the instructor for help, says Heidari. And you’ll never have to guess which springs to be using—the instructor will call out any changes throughout class. As with any fitness method, proper form is everything (and you’ll want to avoid falling off the machine), so you’ll want to get this right.

Carriage and platforms? Check. Springs for resistance? Check. Next is getting the hang of the straps attached to the reformer. Some traditional Pilates machines will have only one set of straps. But in many boutique fitness studios, Flex Studios included, you’ll find the hybrid reformer machines have two sets of straps—a long set and a short set. These will have loops on the end and can usually be found at the shoulder rests and at the front or back of the machine. They can be used in endless ways, but generally, Heidari says the shorter straps are used to create heavier tension, such as for lower-body or abs-focused moves. The longer straps on the carriage are typically used for more traditional Pilates exercises that focus on balance and stability while on the carriage.

One easy way for newbies to know which straps to use and when “is that the loops that go over the shoulder rests are only for when you’re on the carriage,” says Heidari. “There’s no other time they’re going to come off.”

The first time you try to wiggle your way into one of the longer straps’ loops, you’ll probably struggle to release them with enough slack to get into position. Remember that like the springs, the straps provide tension. Heidari shares how to look like a pro, instead of trying to stretch your extremities into contortion-like positions: Lie down, putting your head between the shoulder blocks. Reach behind to remove the loops, then bend your knees into your chest to bring the loops and your feet closer. This should allow you to slip one foot through a loop. Extend that leg to release the tension for the other strap and you’ll be able to easily get the other foot in.

Depending on how wide it is, the front platform can be used to stand on. “I know a lot of teachers like to hop up there and do lateral work,” says Heidari. “So, facing the side you can do standing inner thighs, you can do pistol squats, you can do all kinds of stuff. But it’s basically just to give you a stable place for one leg or one arm.”

This platform can also be a “safe space” if you’re still getting used to the instability of the carriage. If you feel like you’re going to fall or injure yourself, Heidari says the front platform is a perfectly fine place to regain your balance and reset yourself to continue the movement. “It depends on what we’re doing on the machine, but that’s a great place to fall back on, to just step off,” she says. “To just know that there is a piece of non-moving equipment that’s not going to change or move on you.”

If you’re used to sprints and bursts of intense Tabata work, the slow and controlled movement in a Pilates reformer class might seem foreign at first, but you’ll quickly realize why slow doesn’t mean easy. Keep in mind that having control during the eccentric part of an exercise (when the muscle lengthens, like the lowering movement of a biceps curl or the standing movement of a squat), is critical to everything you do in class. So if the springs are on a heavy setting for a forward lunge, you should be mindful not to let the carriage slam closed from the tension, says Heidari. “Can you control the carriage to come back in, or control your arms to return back to neutral?”

“I witness a lot of not wanting to breathe,” says Heidari. “I think that breath is something that’s really hard for people to grasp in the beginning.” But classes at Flex Studios will include breath coaching throughout each twist and turn—as much as you’d expect from a yoga class, she says. Plus, Pilates was first designed as a form of rehab, so it makes sense to think of a reformer class as a way to fine-tune your body’s natural movements and perfect your breathing. Heidari says she and other instructors can watch how you set up for and get out of an exercise, and offer guidance on how to control the movements and your breath.

“My biggest tip when I talk to newbies is that a lot of the stuff that we’re asking you to do in our space is a lot smaller than you think,” says Heidari. “Pilates is the little muscles.” Using a limited range of motion really targets those small, deep muscles that Pilates is known to recruit, but this can be confusing for rookies who think bigger movement equals bigger results. The aim is to get those tiny muscles to fire first, before using larger muscles or muscle groups, says Heidari.

Keep in mind that not all Pilates reformers are exactly the same, but this guide should help you get a sense of what to expect. (BTW, Pilates apparatuses and other equipment don’t start and end with the reformer. There are many other pieces that resemble a jungle gym, and these are typically utilized in personal training situations, but…baby steps.) Regardless, one round on the reformer, and we can all but guarantee your core is going to burn and shake like never before. With the lean, toned muscles and bonus flexibility you’ll gain, don’t be surprised if you’re hooked on the Pilates reformer.

Pilates Reformer: The ultimate workout to reshape your body for summer
June 15, 2020

The devices of the PILATES method: “Universal Reformer”
July 15, 2019