The goal of Pilates is coordination of body, mind and spirit

You are here:
About PilatesHealth 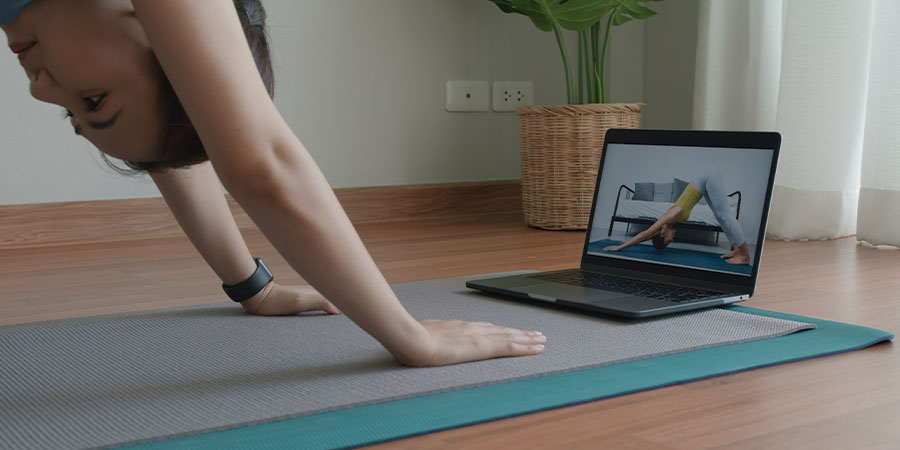 Looking for a new exercise to tone and strengthen your core? To improve your posture and flexibility? A low-impact exercise you can do at home or in a class? Something to lessen back and neck pain after long hours at the computer?

Have you considered Pilates? There are several Pilates studios in Ulster County, and you can also try Pilates virtually, on a mat at home. Or take private or semi-private Pilates lessons on equipment like a reformer, designed to provide resistance and guide your movements.

Joseph Pilates was a German-born circus performer and boxer who developed the exercise routine that bears his name. He aimed to strengthen the mind and the body. His philosophy of movement was based on six fundamental principles: centering, control, flow, breath, precision and concentration.

When World War I broke out, Pilates was imprisoned in a British internment camp. He started rehabilitating injured detainees. When he wanted to incorporate resistance, he didn’t have weights or other props when he wanted to incorporate resistance, so he used bed springs and beer-keg rings for tension. Springs are still part of the reformer’s design. Beer-keg rings have evolved into the “magic or fitness circle,” a small hoop used in a variety of exercises.

Pilates and his wife Clara emigrated to New York in 1926. They set up a studio where Joseph taught for the next 40 years.  Clara taught for another ten after her husband died.  Their strengthening and rehabilitative exercises became popular with dancers who rehearsed at nearby studios. Pilates exercises have since evolved, but they are still widely used by dancers and recommended by physical therapists.

The goal of Pilates is the “complete coordination of body, mind, and spirit.” Like in yoga, breathing correctly is critical. In Pilates, though, you’ll breath in through your nose and exhale through your mouth because it helps engage your core. Unlike in yoga, you won’t hold your poses. There’s no spiritual component or meditation. Nonetheless, concentration and form – doing poses precisely, moving from your center out – are essential.

Melissa Bierstock is a dance and Pilates instructor with her own studio, Mainly Pilates, in Kingston. She says Pilates is “a stretch and strengthening technique.” Bierstock grew up in Ulster County and trained as a dancer from the age of four. She moved to Toronto in 1996 and performed there professionally in both modern dance and ballet. She used Pilates techniques to treat injuries and became certified in the Stott Pilates Method of Body Conditioning so she could start teaching.  When she became pregnant with her daughter, she convinced fellow dancer and husband David Loewen to get certified so he could take over her classes.  He still teaches today at Pilates on Main in Gardiner.  (The couple are now divorced.)

Bierstock trained National Ballet of Canada dancers and owned a pilates studio in Toronto until her return to the Hudson Valley in 2007.  She opened Mainly Pilates in 2008, and now owns and teaches at the Ballet School of Kingston, formerly the Annie Hebard School, where she learned her first ballet steps as a child.

“Pilates is for everyone,” Bierstock says. She believes that it should help with activities from running to skating, dancing or walking. Pilates will teach you proper alignment and stability. “We try to strengthen the body in all of its planes and directions, moving carefully and methodically.”

Mainly Pilates studio is roomy and quiet. You’ll probably start prone on a mat, centering your core or “powerhouse,” as it’s known in Pilates. Bierstock admits she’s a stickler for form. “I don’t let people move on until they’ve mastered the fundamentals,” she explains. Mat classes run for an hour, and you might use a strap, ball or “fitness circle” in your exercises.

While many people only do Pilates on a mat, some prefer the more intense workout of a reformer machine. The machine, which looks like a wooden bed with a cushioned platform called a “carriage” that rolls back and forth. Springs are set with varying degrees of tension as you pull yourself with straps or pulleys.

Bierstock says her students master the basics on the mat, but soon enjoy using one of the two reformers or the other apparatus she has, “half-Cadillac, half-towers,” which provide a lot of feedback.

Most of the classes at Mainly Pilates went on Zoom when the pandemic broke out, Bierstock says. The virtual classes worked so well that she and her clients decided to continue them online. Bierstock leads noon classes on Zoom three days a week, Monday, Wednesday and Friday, and there’s an in-person class on Wednesday evening.  All classes cost $22 each, four for $80.

Joseph Pilates developed hundreds of exercises; his followers have come up with hundreds more. But here are three basic exercises Bierstock recommends to get you started on Pilates:

The cat. If you suffer from lower back discomfort, get on your hands and knees. Starting with your tailbone, curl your back up into an arch, then slowly return to a flat spine.

Pelvic tilt. Use the lower abdominals to crawl the belly back in and allow the tail a little curl. “It’s a really nice stretch, and this exercise starts bringing the abdominals into your awareness.”

Clam shell. Lie on your side with your knees bent.  Try to keep your hip still as you open and close your leg several times. (Most Pilates exercises are done with only a few repetitions, since they all involve your core.)

If you want to try Pilates on your own, there are some good classes on YouTube.

After a Pilates workout, Bierstock says, “You should feel a sense of being lifted in yourself and that you’re carrying yourself a little bit better. You’ll feel taller, and you can breathe more easily because things are where they’re supposed to be.”

You may even sleep better. Enjoy!